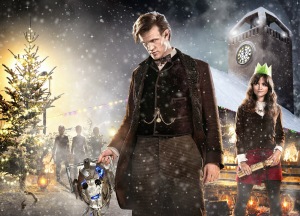 It’s a guy in tweed pants holding a robot head. What’s not to like?

I like Doctor Who. For those who know me, it probably comes as little surprise. I know all about Davros, both types of Cybermen, Bad Wolf, the Time War, celery that turns purple, jelly babies, and Gallifrey,

I don’t know why I haven’t seen a significant number of episodes, I just haven’t. It’s on the telly often enough, but I just don’t find myself compelled to stop when I’m channel surfing.

One of the first episodes I watched as an adult was at a friend’s house. We were getting ready to go out and it happened to come on after Spicks and Specks (an Australia quiz show about music – if you haven’t seen it, I highly recommend it). David Tennant, the Tenth Doctor, was trapped in a hospital…which was then shot into space because of reasons. I think he was hunting some kind of vampire who sucked out people’s “life essence” through a straw – an actual straw, with a yellow and white barber pole pattern. And then some rhino space police burst in and threatened to kill everyone.

Recounting that, I still can’t think of a reason I don’t like Doctor Who. It sounds like it has all the hallmarks of something that I’d absolutely love.

I even tried to get on board with the show again when Matt Smith made his debut. I think I watched two episodes, maybe three, before my resolve wore off. But there wasn’t any one moment that I decided “no, I’m not going to watch this any more.”

But that being said, I’ll go out of my way to read up about Doctor Who. I’ll watch Youtube videos of people’s theories and reactions to certain episodes, I’ll go on a Wiki Walk or go through TV Tropes to learn about the Doctor’s adventures, hell, I’ve gotten into arguments with friends about Doctor Who.

I think my reasoning boils down thus. My mum was a big fan of Doctor Who when she was a kid, and I remember her trying to show me the very first episode ever. This was years and years ago, I couldn’t have been more than 10-years-old. Anyway, 10-Year-Old Cameron didn’t have the longest of attention spans (Adult Cameron types this after wasting 15 minutes playing Rainbow Unicorn Adventure on his iPad) and thought the series was kind of hokey and very quickly got bored with it.

It’s funny that something in your childhood can have such a subtle manifestation in your adult life. Adult Cameron would probably love to go back and watch the very first episode just for novelty sake.

Eventually I will sit down and try to watch the series, probably from the revival onward, but I think I’d have to be in the right mindset. Almost psych myself up to do so.

I don’t know if I’ve ever experienced this sort of thing with any other series. I guess maybe I could say it about Warhammer 40,000 – but I used to play the tabletop games when I was a teenager, and I still read some of the books.

I watched the 50th Anniversary Special, The Day of the Doctor, and thoroughly enjoyed myself. I gave it four-and-a-half stars! I genuinely had a blast watching it. But you know what? The best I can do is say I might watch the next series. I’ll try and watch the Christmas Special, but I’m making myself no promises.